No items found.
Product is not available in this quantity.
Contact 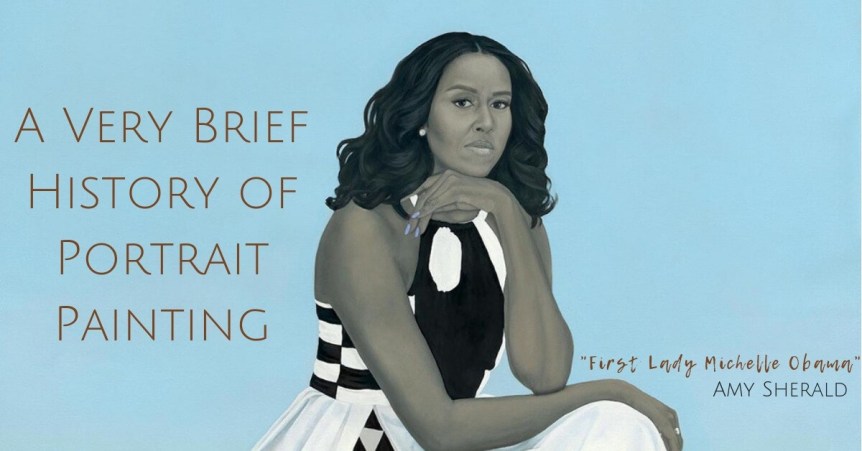 For as long as there has been painting, there has been portraiture. Portrait paintings date back to at least 5,000 years ago to ancient Egypt, where the art form is said to have originated (although many other ancient peoples also practiced portrait artistry). Portraits are defined by the Tate Modern museum as simply a “representation of a specific person”. Paintings are not the only way artists can create portraits. Sculptures, photos and drawings are also considered portraits as long as the art aims to depict the expression, likeness or mood of a particular person.

Some of the earliest known portraits are called the “Statues of Gudea”. 28 of these little statues remain and are considered portraiture because they all have similar features which appear to be representative of and unique to Gudea - a powerful ruler of ancient Lagash.

Ancient portrait murals from Pompeii have been well-preserved for almost 2000 years by lava and ashes. One of the most famous is titled “Terentius Neo and his wife”. He holds a scroll and her a tablet - originally thought to be indicative of their status andeducation. Historians of today now disagree on Terentius Neo’s profession, some claiming him as a law student while others believe he was a baker (http://www.portrait-masters.com/history/).

During the renaissance and middle ages, portrait artistry began to take on a new form. Rather than highly realistic features of their subjects, artists of this time tended to create portraits with stereotypical facial expressions, flat backgrounds, and a lack of realism (portrait-masters.com).

In 1503 AD, Leonardo da Vinci created perhaps the most iconic portrait of modern art history: the Mona Lisa. Da Vinci used a different technique than many other painters of this time. Instead of hard and very realistic lines, da Vinci used soft and blended brush strokes. While the Mona Lisa is an incredible painting with her playful smirk and expressive eyes, this painting probably got most of its notability due to its infamous theft in 1911. During this era, only the wealthy, powerful, and those with status could afford a portrait painting. Paints and canvas were hard to come by, and had to be made by apprentices in a studio.

With the Industrial Revolution came mass production of art supplies. This meant that for the first time, middle class families could afford to purchase supplies and learn to paint. Notable French painters such as Gustave Courbet and Honoré Daumier were part of the Social Realism movement, and for the first time depicted portraits of the middle and working classes at the time. This is also the time when the Impressionists and Post Impressionists began questioning the nature of portrait artistry, and pushing their artistic boundaries.

Perhaps the two most revolutionary artists of this period were Vincent Van Gogh and Paul Gauguin. Both created portraits in the late 1800’s that were shockingly different than any portraits that had been created up until this time (craftsy.com).

During this time, artists began exploring the inner psyche of their sitter, more so than their facial features or expressions. Portraiture emerged as an exploration into human psychology, with artists such as Matisse and Picasso playing with color, line, and form like never before.

In the mid-1900s, portrait artistry began to become less popular - instead making way for abstract and conceptual arts. In the 1960s, however, artists such as Andy Warhol and Roy Lichtenstein brought portraits back to the limelight with the introduction of pop-art.

Perhaps the form of portrait artistry that is most widely practiced today is the art of the selfie. With our cell phones, we have all become expert portrait artists, snapping photos of those we love and ourselves in a variety of places and situations. In the art world, portrait artistry and portrait paintings continue to be a popular art form that can take many, many different approaches and forms.

Request a Consultation
With Christina

You’ll scoop up an exclusive collector’s edition digital art print for free, plus regular complimentary content and other juicy exclusives only available to our digital fam.

Thank you! Your submission has been received!
Oops! Something went wrong while submitting the form.

5 out of 5 stars on Google
See Reviews